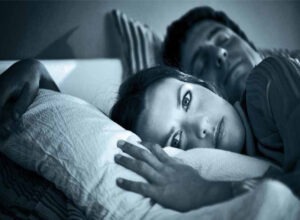 Insomnia is a sleep disorder characterized by the inability to sleep and/or to remain asleep for a reasonable period during the night. Sufferers typically complain of being unable to close their eyes or “rest their mind” for more than a few minutes at a time.

Sleeping problems can include: difficulty falling asleep, easily disrupted sleep, difficulty returning to sleep, waking up too early in the morning, and unrefreshing sleep.

A 2005 survey titled “Sleep in America”, conducted and reported by the National Sleep Foundation, reported the following findings from recent poll questions related to insomnia.

Most of the drug based methods used to treat insomnia include chemicals that either imitate a neurotransmitter or redistribute existing neurotransmitters. Many a ect serotonin, and some affect other neurotransmitters like GABA, norepinephrine or dopamine. It is generally believed that drugs supporting serotonin signaling will be beneficial when insomnia results from a lack of serotonin and that GABA supporting drugs will be e ective when a person’s symptoms are caused by a lack of GABA.

At Dr. Freedman’s office, we have the capability to evaluate your neurotransmitters levels. Armed with this knowledge, we are able to utilize targeted amino acid therapy to correct your neurotransmitter imbalances. This method has been utilized for over 20 years and is regarded as natural, safe, and successful.